The Government is Literally Burning Money

Did you know that in 2010 the United States government burned away 2.6 billion one dollar bills! 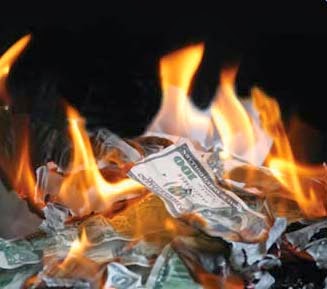 You may think this article is about government waste or excessive spending but it is not. You see money doesn’t last forever. The currency we use is very susceptible to wearing out. On average, a bill will last maybe 5 years. For the more used denomination like ones and twenties, it is closer to 3. So what do you do with the cash that is worn out? The old money is exchanged for newly printed cash. Since the old money is still usable, it must be destroyed.  While there are some creative ways of using that old cash, it is still mostly burned.  Can you imagine being the person to light fire to a pallet full of cash?  To know that many dollars is going up in smoke?

The truth is however cash really isn’t worth anything. It is just sheets of linen (not paper as is commonly believed) dyed and painted a certain way. Its value only comes in our belief in what it represents. We see it as having value because we are told it has value. That value gives it power. People will go wild for it. Throw some cash in the air and watch how people will fall all over themselves to grab some. People have toiled, fought, bleed and killed to get it. All that for something that is just going to be ashes in a few short years.

So when we think about it, how many other things in our lives do we ascribe more value than it really is worth?  The world tells us it is so important, so we chase after it.  How many have fallen away from the Lord chasing after things that when they get them prove to be of no real value.  I think back to when I was younger to the things I wasn’t allowed to do for the moral implication that went with the activities, that I felt I was missing out on the greatest thing in the world. Looking back now I see how foolish they really were. Why would I ever risk my soul being in jeopardy for that?

Paul says in Philippians 3:8,  “More than that, I count all things to be loss in view of the surpassing value of knowing Christ Jesus my Lord, for whom I have suffered the loss of all things, and count them but rubbish so that I may gain Christ,”. Paul is telling us don’t sacrifice true value for trash. When we are faced with decisions in our lives don’t let anyone other than the Lord set the value.  The world will try to convince you that that something that will in the end be burned up is more valuable than your eternal soul.

What might seem to be of value now will just end up in flame!
Posted by Barry Haynes No comments:
Email ThisBlogThis!Share to TwitterShare to FacebookShare to Pinterest
Labels: Choices, Money, Priorities, Value 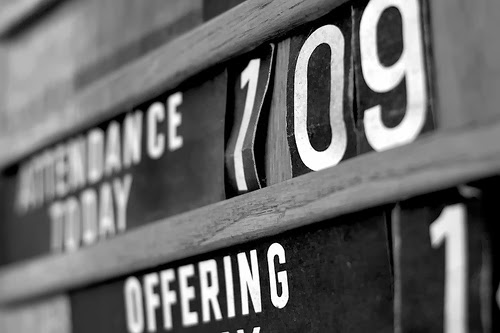 In almost every church I've been in there is a board up front that lists some statistics for the church.  Now the way they are organized and what they are called varies but normally it falls into two categories:  Contribution and Attendance.  Attendance is the number of people who show up to any given service, a head count.  Contribution refers to what people gave during that time, usually a dollar figure.  Let me tell you something, the contribution is the more important part of worship than the attendance.

Now before you dismiss me as a money grubbing preacher let me clarify something.  When I say contribution, I'm not meaning just the offering that is collected on the first day of the week.  I mean what we contribute to the worship.  Did we sing and make melody with our heart? Did we pray along in prayer?  Did we consider the word of God being taught and apply it to ourselves?  Did we examine ourselves before we remember the Lord’s death with the communion?  And yes, did we purpose in our heart to lay by and store for the Lord's work?  Did we participate and contribute to the worship or did we just show up?

You can’t contribute if you don’t attend but don’t think that just attending is what worship is all about.  Hebrews 10:24-25 tells us;
And let us consider how to stimulate one another to love and good deeds, not forsaking our own assembling together, as is the habit of some, but encouraging one another; and all the more as you see the day drawing near.

In worship we not only praise God but also teach and admonish one another (Colossians 3:16). To do that it takes more than just being at a place, it takes an active mind engaging in the process.

We not only have a service to attend but we must also attend to service. What is your contribution to worship?

Recently a young man was kicked off a Southwest flight bound for Chicago because of his shirt.  His shirt boldly proclaimed a dirty word that still isn’t allowed on television.  The airline has a clear policy on every ticket about offensive language and dress.  The young man was convinced that no one was offended by the language but the crew held their ground.  I glad they did and help keep a modicum of decency for at least that flight.  It seems however that profanity is becoming much more accepted part of our culture.  Many don’t think a thing about filling their speech with any swear and curse word they know. 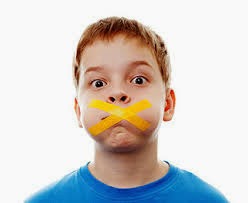 But what about the Christian? How should we view this kind of language? What does the Bible teach about the vocabulary we use?

Well first let’s figure out what we are talking about.  What makes a word a bad word?  I think a simple way is to look at the words we use to describe this language

Swearing:  To swear is to make a solemn oath.  A person wanting to make sure that what they were saying to people was truly believed by them would swear by something (Ex. Matthew 23:16-23).  It was way to give force to your words.  That’s what many do with modern day swearing, a way to give emphasis the statement you are making.
Cursing:  A curse was a proclamation of doom and ridicule on a person.  It was a way for one to call another to task for their actions (Ex. 2nd Samuel 16: 5-10).  Modern cursing is a word that is use to demean and insult, a way to show ridicule and scorn.
Profanity:  To profane is to treat a thing that is sacred with disrespect.  It is to use a word of reverence in vain (Ex: Exodus 20:7).  The modern day use is seen in taking a word and using it as an exclamation that holds no meaning to the word.  It is those that take holy names and use them as derogatory euphuism.

So what how this help us in what kind of language we should use?  Let’s consider some verses:

But above all, my brethren, do not swear, either by heaven or by earth or with any other oath; but your yes is to be yes, and your no, no, so that you may not fall under judgment.
James 5:12
With it we bless our Lord and Father, and with it we curse men, who have been made in the likeness of God;  from the same mouth come both blessing and cursing. My brethren, these things ought not to be this way.
James 3:9-10
But now you also, put them all aside: anger, wrath, malice, slander, and abusive speech from your mouth.
Colossians 3:8
Let no unwholesome word proceed from your mouth, but only such a word as is good for edification according to the need of the moment, so that it will give grace to those who hear.
Ephesians 4:29

Look I’m not going to tell the words you can and cannot use, but the Bible makes clear that ideas  we are reflecting in our words matter.  If we are filling our language with empty vain words that harm, profane, and denigrate, if our speech reflect a mind that disregards God and others,  if our speech is vulgar and shows a worldly view rather than a Godly one, it should be censured.  Jesus told us in Matthew 15:18, "But the things that proceed out of the mouth come from the heart, and those defile the man.”

Is your mouth as clean as your heart should be?
Posted by Barry Haynes No comments:
Email ThisBlogThis!Share to TwitterShare to FacebookShare to Pinterest
Labels: Judgement, Language, Speech
Newer Posts Older Posts Home
Subscribe to: Posts (Atom)
Follow @13arry